How did I become this sarcastic suicidal being?

How did I become this sarcastic suicidal being? Funny story.
When you meet someone you ask questions about them but those questions only go skin deep not psychologically, no one asks why you are wearing a green shirt over red, anyway my point being, what I am about to share some people may vaguely remember others I don't usually share, in fact very rarely say. Instead of drugs or some normal rebel habit, when I was aged 13 and faced my first close death to the family, my nana I did not know how to respond, but the way I did has shaped me to who I am, if I am anyone at all. Friends after that summer said I had changed. I denied I had changed then but can see it now. I developed more than on obsession with the band My Chemical Romance. Front Man Gerard way, brother Mikey, Frank Iero, Ray Toro (to whom birthday I share which made me think it was fate) and drummer Bob. The words these men sang and spoke became my every breathe, every thought and every movement. I wore black because they did, I went liberal because Gerard did, I got obsessed with coffee and Starbucks because Gerard loved Starbucks. All my passwords and account names had something to do with the band. I listened to the Black parade, 14 songs before  I went to sleep, I could not sleep if I didn't, It became a ritual. I had a book of all their lyrics. Every time I went on the computer I would copy picture after picture, I learnt to play their songs on piano. I bought several copies of their CDs because they had alternative covers. I bought badges, shirts and covered every inch of my room in posters. I could not get enough.
Every since of be was an obsession and now eight years on I can trace things about me back to either Gerard of MCR. Funny in a way. The obsession probably lasted two years. and now only a month or so ago the band broke up after their fourth album was released. I was disappointed in their fourth album as I was so madly in love with The black Parade that NOTHING could compare to it. Even Three cheers for sweet revenge called to me.
On their tour DVD Life on the Murder scene Gerard quotes the band saved his life and is there to save other peoples lives. My Chemical Romance is a band that wants to save your life, and well It saved mine then and now I'm going through harder things and I seem to be listening to them more and once again they are pulling me through. I can't imagine my life without their influence and so blessed to be a fan. THANK YOU MY CHEM!! I will always love you.

So that was my life age 13 to 15...  But what happened after that? Well I will tell you but from here on in, it's a dim slippery slope to damnation.
Well I have never been one of those people with really close friends but this was proved more dominant. If I wasn't sitting alone in class I was sitting alone at break. Group to group was the same discussing the latest 'Twilight' novel or who posted what on Facebook. Everyone was a fake or an imitation of what they wanted to be not who they were. Pretty sure I was just another speck of dirt on the cement, well that was how I felt anyway.
So while more and more people kept leaving my life I was left to myself. The depression grew and grew until I was planning my suicide whilst I was cutting and then I was offered a job and I left school. I hated school so much, leaving was the best thing I ever did, but still nothing changed how I was on the inside. A year went past as I battled then once I turned 18 and safely knew my parents could not find out.
Doctors to hospital to stiches to blood spilled to admissions to medication to overdoses.
Bringing me to the present moment. I am currently on in the morning 200mg Sodium Valporate, 100mg quetiapine, 30mg excitalopram, then at lunch 200mg quetiapine, if need be Lorazepam, Oxazepam, Temazepam, then at night 200mg Sodium Valportate, 300mg quetiapine XR.
Sarah-Kate 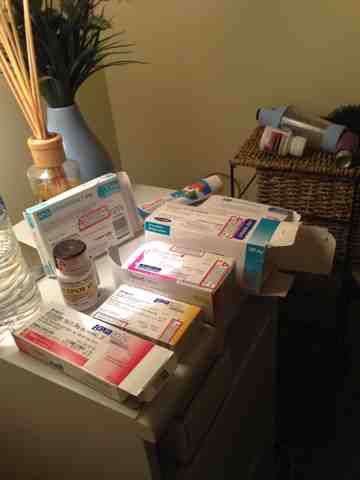 Posted by Denying the beginning of the end. at 04:08